Who should worry about the wave of rate increases this year, who shouldn’t and what every stressed-out borrower should do right now 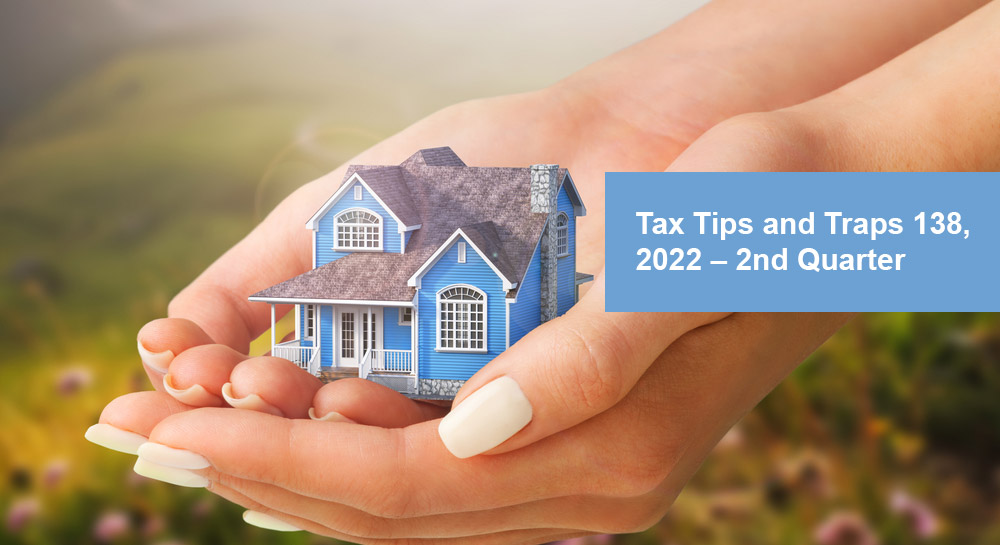 Some quick points to consider…

The 2022 Federal Budget included several proposals that would significantly change the taxation environment when buying and selling a home. Broadly, the government proposed various incentives for first-time buyers and extended family units in addition to bright-line tests/restrictions for those purchasing homes for profit (e.g. home flippers). Taxpayers should consider how the changes will affect their intended purchases and sales. In some cases, it may be beneficial to expedite a purchase or sale, while in others, it may be prudent to delay.

New possibilities and enhanced programs include the following:

New cautions and restrictions include the following:

In addition to the above tax measures, Budget 2022 proposed to develop and implement a Home Buyers’ Bill of Rights and national plan to end blind bidding. This Bill of Rights could also include items such as ensuring a legal right to a home inspection and ensuring transparency on the history of sales prices on title searches.

ACTION: Consider the expected timing of implementation for each of these measures and the impacts on purchases or sales.

In early 2022, CRA began to send out education letters in respect of individuals claiming the principal residence exemption (PRE) in the British Columbia region. Often, regional projects such as this are used as pilots for subsequent national projects. As CRA has indicated that they have a larger overall focus on real estate transactions, similar or extended versions of the project may be coming.

The letters advised that the taxpayer or their representative review the return and adjust it if necessary. The letters also stated that an agent would follow up with a phone call to answer any questions.

ACTION: If such communications are received, a tax advisor should be promptly advised. Letters that appear strictly educational can turn into costly audits. Inappropriate and untimely responses may lead to adverse assessments in addition to penalty and interest charges.

Over the last year, CRA has increased verification activity in respect of eligibility for the Canada Emergency Response Benefit (CERB) and the Canada Recovery Benefit (CRB). As a result, a number of disputes have hit the judicial system. One of the focus areas has been the prior earnings test. To be eligible for either CERB or CRB, an individual must have earned at least $5,000 of income from certain sources (such as employment, self-employment or parental benefits) in 2019 or in the 12-month period preceding the day on which the application was made (or in 2020 for CRB claims made in 2021).

Acceptable evidence to substantiate a claim can include the following:

Where an individual is denied benefits, they can request a second-level review from CRA. If this is still not successful, the taxpayer’s only recourse is to apply to the Federal Court for a judicial review of CRA’s decision.

In the cases below, the courts found that CRA’s decision to deny benefits was reasonable. In one case, the court stated that the above list of acceptable proof to substantiate a claim is not an exhaustive list and that CRA may ask for further support. Specifically, the Canada Recovery Benefits Act states that “an applicant must provide the Minister with any information that the Minister may require in respect of the application.”

The taxpayer claimed to have earned $5,250 from tutoring activities in January and February 2020; however, he ceased operations shortly after due to COVID-19 and applied for CERB. No business income was reported in 2019. The taxpayer tried to prove his earnings of $5,250 by providing invoices for tutoring on which the word “paid” was stamped. The CRA agent was unable to match the names and addresses on the invoices to those on CRA’s computer systems. Also, the taxpayer could not support that the amounts were paid; the taxpayer argued that the amounts were paid in cash and never deposited into his bank account. The Court ruled that the taxpayer did not provide sufficient support to demonstrate that he actually earned the amounts.

In a similar case, the taxpayer was unsuccessful in supporting her alleged earnings of $5,350 in the twelve-month period prior to application regarding home services (cleaning, food preparation, washing dishes, etc.). The taxpayer did not provide

ACTION: Where eligibility for these supports is at risk, make sure that documentation is retained which demonstrates both the performance of an income-earning activity and also the receipt of funds.

invoices for the alleged earnings or bank statements showing the deposits, both of which the agent stated would be needed to verify the prior period income. The Court agreed with CRA that a taxpayer’s notice of assessment including the relevant income was insufficient to substantiate that the prior period earning requirement had been met.

In an attempt to identify unreported revenue, CRA and Revenu Québec may compare a business’ reported revenue to what would be expected given the business’ level of purchases. The analysis is based on industry-specific profit and revenue ratios.

In a January 31, 2022 French Court of Quebec case, Revenu Québec had assessed QST on additional income for a pizzeria by applying industry revenue ratios to purchases made by the restaurant between 2013 and 2017.

The restaurant argued that it purchased supplies not only for itself but also as an agent for other restaurants so that better deals could be maintained. Further, it argued that it did not have the capacity to generate the level of gross revenue that Revenu Québec assessed based on its available resources.

While the taxpayer argued that it did not have sufficient staffing capacity to generate the assessed level of revenues, evidence was presented that indicated that not all staffing hours were recorded and reported. Further, one of the parties for whom the taxpayer allegedly purchased supplies contradicted the taxpayer’s position. As such, the Court found Revenu Québec’s estimated assessment of gross revenues correct.

In another case, Revenu Québec noted that the sales records for a used car dealership indicated prices as low as $25. Therefore, the auditors took a sample of 15 sales and followed up with calls to the customers, finding that several had paid prices that were significantly higher than those reported on the sales records. The values of all vehicles sold were then redetermined primarily by using the values included in a regionally recognized auto price/valuation publication (Hebdo Mag guide). The Court upheld Revenu Québec’s assessment.

CRA may reassess the tax returns for CCPCs and individuals within three years from the sending of the notice of assessment. Returns for which this three year period have expired are commonly referred to as being “statute-barred.” However, CRA may reassess a return beyond this period in certain cases, such as where:

Although there are restrictions on when a (re)assessment can be made, these limits do not apply to the periods that CRA may audit. In other words, while a taxpayer may believe that they cannot be assessed for periods beyond three years, CRA still has the ability to analyze those prior years and ask for information, as long as it is reasonable. Likewise, although taxpayers are only generally required to retain support for six years after last being applicable, CRA can still request older documents. If the older documents are available, they must be provided.

In a January 10, 2022 Federal Court case, the Court addressed an application for judicial review of CRA’s decision to expand its audit of the taxpayer and his professional corporation to encompass the 2003 to 2018 taxation years.

The audit, which was initially limited to the 2010 to 2016 tax years, was prompted by information obtained from Citibank and the Royal Bank of Canada under an unnamed persons’ requirement for information on transactions involving the Cayman National Bank. The information identified funds entering Canada, including bank drafts to car dealerships for vehicle purchases. CRA’s initial review identified a Cayman Islands corporation (“COG”) in which the taxpayer and a number of other Canadians, also screened for audit, were involved.

The Court noted the following:

CRA’s requests were held to be reasonable, so the application for judicial review was dismissed.

As of 2015, financial institutions must report electronic fund transfers (EFT) into Canada of $10,000 or more not only to FINTRAC but also to CRA. Where two or more EFTs of less than $10,000 each are made within 24 consecutive hours by or on behalf of the same individual or entity, and the total is $10,000 or more, they are considered to be a single transaction and must be reported. CRA may use this data to identify and audit taxpayers, with the goal of reassessing the receipts as taxable business income.

The audit, which was initially limited to the 2010 to 2016 tax years, was prompted by information obtained from Citibank and the Royal Bank of Canada under an unnamed persons’ requirement for information on transactions involving the Cayman National Bank. The information identified funds entering Canada, including bank drafts to car dealerships for vehicle purchases. CRA’s initial review identified a Cayman Islands corporation (“COG”) in which the taxpayer and a number of other Canadians, also screened for audit, were involved.

The Court noted the following:

In a December 14, 2021 French Court of Quebec case, a married couple had received funds from China totalling just over $600,000 from 2009 to 2011. The taxpayers owned a small restaurant in Montreal. Revenu Québec took the position that, since they could not verify where the funds came from and why, the funds were undeclared income. The taxpayers argued that they were gifts and loans from family members in China.

Although the taxpayers were not able to obtain banking records from China supporting their argument, they were able to have the parties in China corroborate their representations via video conference. The Court determined that this was sufficient to transfer the burden of proof to Revenu Québec, who was not able to demonstrate that the funds were undeclared income. Therefore, the funds received were determined to be non-taxable.

On March 3, 2022, the Canada Digital Adoption Program (CDAP) was launched and opened for application. This $4 billion program provides funding through two initiatives.

This initiative provides $2,400 micro-grants and access to e-commerce advisors to help applicants adopt digital technology. Grants can cover costs such as website development, search engine optimization, subscription fees for e-commerce platforms and social media advertising. To be eligible, businesses must be for-profit (including for-profit social enterprises and co-operatives), be registered or incorporated, have at least one employee, commit to maintaining a digital adoption strategy for six months after participation and partake in post-program surveys, share information with the government

(e.g. Statistics Canada) and allow the business’ name to be published as a recipient of funding. Corporate chains, franchises or registered charities, representatives of multi-level marketing companies and real estate brokerages are ineligible.

This initiative provides Canadian-owned small and medium-sized enterprises grants to develop a digital plan and leverage funded work placements to help applicants with their digital transformation. The grant can cover up to 90% (to a maximum of $15,000) of the cost of developing a digital adoption plan. Businesses can also apply for an interest-free loan of up to $100,000 from the Business Development Bank of Canada. Eligible businesses must be a Canadian sole proprietor or corporation, be a for-profit privately owned business, have between 1 and 499 full-time employees and have had an annual revenue of at least $500,000 in one of the three previous tax years.

Applicants will also need to complete a digital needs assessment that will generate a report outlining the applicant’s digital maturity and compare it to an industry-specific benchmark. Once the assessment is completed, applicants can select a digital advisor from those registered with CDAP and determine the specific terms of work and cost for the digital application plan. Once the advisor has completed the digital application plan, it can be submitted for grant payment. Organizations that meet specific criteria to deliver digital advisory services can register with CDAP to provide these services to eligible applicants.