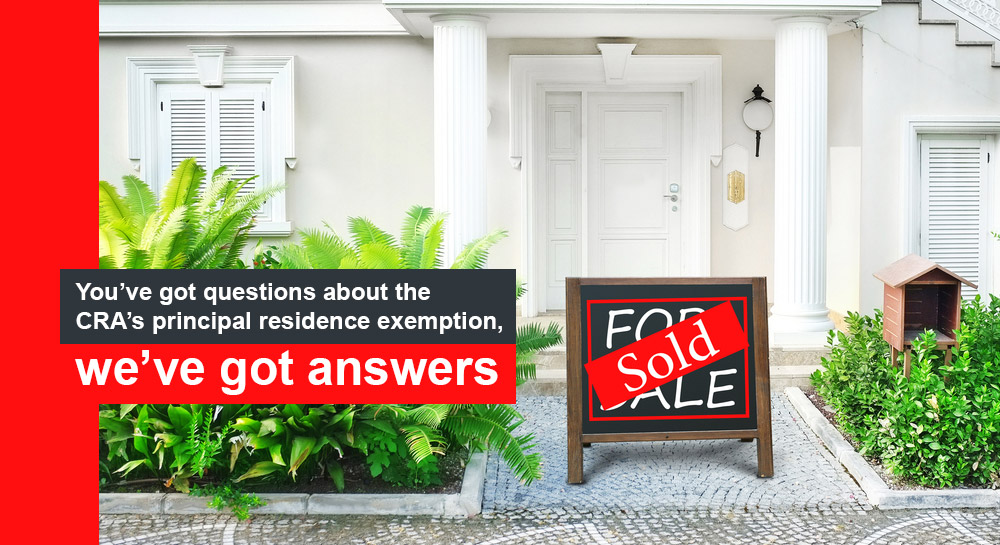 Jamie Golombek: CRA’s recent crackdown on perceived abuse of the PRE has sparked a barrage of reader interest

To recap, the CRA recently sent out educational letters to individuals “who may have applied the PRE in error,” giving them a chance to correct or amend their prior years’ returns if it turns out they incorrectly claimed the PRE. Here’s a sample of your questions (edited for brevity and clarity) and my responses.

Q: We recently sold our home and plan to purchase our daughter/son-in-law’s condo so they can purchase a townhome. At that time, we will occupy their condo and live in it as our principal residence. Our plan is to live there for about six months, at which time our new townhome (currently under construction) will be ready to move into. Do we have to live in the condo for one full year before we can resell it without tax implications? We were told by our accountant that if we bought their condo and it is our principal residence, we can sell it whenever we choose without tax issues.

JG: Your accountant is correct that there is currently no minimum amount of time that you must live in a home before designating it as your principal residence. Keep in mind, however, that one of the federal Liberal party’s platform proposals before the last election was the introduction of an “anti-flipping tax.” Under this proposal, the PRE would not be available for a property sold within 12 months after purchase. To date, no draft legislation on this proposal has been introduced, although information provided prior to the election indicated it was to be effective for the 2022 year. Perhaps next month’s federal budget will have more information on when this will be introduced.

Q: My husband and I own a property in the Laurentians. We purchased it seven years ago as a single sale, but it included two lots. The two lots together measure approximately 72,000 square feet. One lot (about 35,000 square feet) has a house on it, which is our principal residence where we live full time, and the other lot (about 37,000 square feet) is vacant. Both are lakefront properties and visually one lot, but the vacant lot has its own tax bill and address. We are considering selling the vacant lot. Since there is no house on it, are we subject to capital gains tax if we sell the land?

JG: Given that the vacant lot has its own tax bill and legal address, and can be sold separately from the lot upon which your house is located, it’s unlikely its sale would qualify for the PRE. Even if both lots were ultimately sold together, you would run up against the “half-hectare rule.” Under the Income Tax Act, the definition of “principal residence” limits the amount of land that qualifies for the exemption to half a hectare (approximately 54,000 square feet) unless the taxpayer can show that the excess land was necessary for the use and enjoyment of the housing unit.

This half-hectare rule was the subject of a 2018 Tax Court case in which a taxpayer purchased four adjacent pieces of land in rural Quebec, in four separate real estate transactions, amassing a total of approximately 4.17 acres. Her housing unit was located on the land acquired in the first transaction. The other three pieces of land were ultimately merged to form a second lot, on which a pool, barn, garage, septic field and sugar shack were built.

The taxpayer eventually sold 1.47 acres of the property, a woodlot representing 33 per cent of the second lot, to the local municipality for the expansion of the municipal aqueduct and claimed the PRE on the sale. The CRA denied the PRE and the matter went to court. The judge agreed with the CRA, concluding the taxpayer could not establish “on a balance of probabilities” that the land sold was necessary for the use and enjoyment of her housing unit as a residence.

Q: What if you dispose of your city home and designate it as your principal residence. At the time, you had also owned a cottage. You then realize you should not have designated your city home, because the cottage had generated a far greater increase in value and would generate a massive capital gain when sold. You don’t intend to sell the cottage in the near future. Can you amend your tax return to eliminate the designation of the city house and pay the tax, interest and penalties that the disposition of the city house generated?

JG: Tax law gives the CRA the power to permit taxpayers to file late or revoke a PRE (after paying a penalty), but the CRA reserves the right to deny a revocation if “it is reasonable to conclude you made the request for retroactive tax planning purposes.” That said, you can certainly try. It’s ultimately the CRA’s discretion whether to allow the revocation.

Owning both a city home and a cottage can also pose unique problems in claiming the PRE in the case of divorce or separation. For example, say a couple separates and the wife keeps the cottage and the husband keeps the house, but the parties fail to specify in their separation agreement who is entitled to the PRE when the properties are sold in the future. If the wife sells the cottage five years later and claims the PRE for all the years they owned it, the husband will be unable to use the PRE to shelter the gains from the pre-separation years when he ultimately sells the house since the wife had already used it.

“Many separation agreements fail to address this potential problem, resulting in surprises when properties are sold years down the road,” Lorne Wolfson, a family law lawyer at Torkin Manes LLP, said. “The parties should agree on which property should be entitled to the PRE for the pre-separation years and factor that benefit into the settlement of their family law issues.”